Pedro Pisco is a man many in the surfing community haven't heard of, but he was instrumental in turning Nazaré into the big wave surfing hub it is today. Pedro, a native of Portugal, recognised immense potential in Nazaré and devised a plan to place the town on the map.

This small part of Portugal has a stunning coastline, a fascinating history, and hundreds of hardworking men and women. For many years, it has harboured a beast that few people recognised the true potential of until lately.

Could you just introduce yourself and tell us a bit about what you do and how you met Cotty?

My name is Pedro Pisco, I have worked for the City Hall since 2007 and when I entered the City Hall it was to run a local economic development agency, and one of the goals was international promotion. At a certain time, we identified that surfing would be a good way to promote Nazaré and fill the economic lack between summers; because we are touristic. In the summer, we are really packed and one of our goals was to bring some product that could help us grow economically during the winter as well and to fill this gap because nine months is too much.

We started to develop a strategy to attract surfing, and at some point one of our colleagues presented us a project of big wave surfing. It was supposed to be a championship; six teams, huge budget, and we were trying to sell the project to the sponsors with nothing. And then we said okay... but we can really go over the rooftop if we do something with big waves, then instead of having a huge budget we shrank the budget to just one team and we invited Garrett [McNamara] to Nazaré, and to be the face of our project. Then, once Garrett arrived we had a partner for him here in Portugal, but he hadn’t surfed here and realised that it was too challenging. We needed someone more experienced. And there was a conversation between Cotty and Al Mennie, inviting Garrett to go to Mullaghmore, but Garret convinced them that instead of him going there, they come to Nazaré for the swell – and that’s how we met Cotty. It was back in November of 2010. The first year of the project. 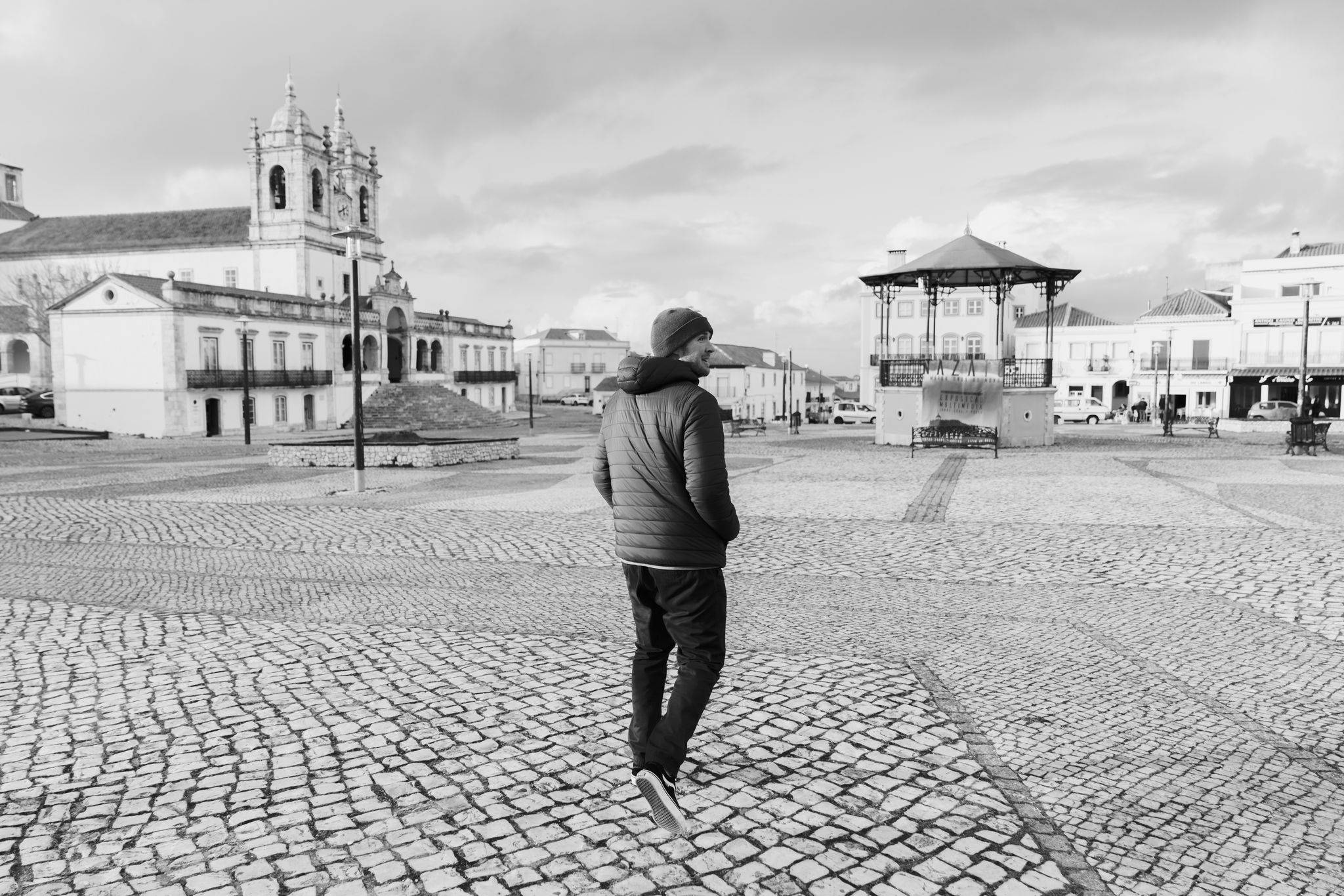 What was your first impression of Cotty?

Well, we didn’t have any experience with big wave surfers, well the first one was Garrett whom is a character. Then when Cotty arrived with Al Manny, Cotty was like he is today, really humble, doesn’t speak much, but really humble and a friend. We could see right there that he was a big wave surfer by passion. And Al Mennie, for me even though their surfing relationship was short with Al only returning for one season, but for me, from all the big wave surfers that I met, the best relationship that I have is with Cotty. He’s family to me.

That’s amazing. That’s similar to what Jorge said as well, he’s very humble and been here since the very start.

Yes, he’s been through so much here and he keeps coming back. He’s overcome all the challenges with injuries. I’m always joking with him that he’s always looking for the best wipe-out here, but he tries and pushes the limits so hard that of course naturally you will have an accident in the pursuit of the best manoeuvre and the best wave and the best line. Sometimes injuries happen, but the way he faces the recovery, the focus with the help of everyone else who is always behind him in these hard times; but he comes back stronger than ever. And he’s amazing!

Amazing. That’s echoing exactly what Jorge said with words like humble and perseverance. How would you sum him up?

I think that’s his character. He’s clearly being humble, of course. And perseverance… with his injury on his back which was the hardest one and a really bad injury. He was here with his personal trainer Blakey spending months in recovery to focus on his comeback stronger than he was before. He’s been struggling, even with surfing… only a few professional surfers live from big wave surfing and sometimes we even joke that he is not a professional big wave surfer he’s an ex-plumber haha. It’s not easy, the path that he made until now in order to become self-sustained his life through the big wave surfing. There’s not many surfers in the world that can say they live from big wave surfing. It needs a lot of work, a lot of furtherance… a lot of the big wave surfers have talent as well, but they don’t achieve these types of standards.

Yeah, so many people have the talent but that really shows his perseverance.

Exactly, exactly. It makes him the man he is today. Most of the time, I see by the other surfers that we have, we are in a high-performance training centre of surfing and of course we have a lot of big wave surfers here in the Winter and they are all struggling, 90% of them struggle to get someone with a jet ski, someone to take them out, they are starting [that is why] we have this building to help them to grow as well and have a network with everyone so they can contact and go out which is easier than back in the day. Most of them struggle to be here for the season and try to surf, and sometimes in the big swells they don’t even get out because they don’t have the economic power to hire jet-skis, to get someone to drive them out; they are always depending on the good will of the other surfers, Cotty does that too, sometimes he helps the guys. It’s really a very competitive world and a very small market and the ones who survive are the ones who are the most talented and mentally strong. 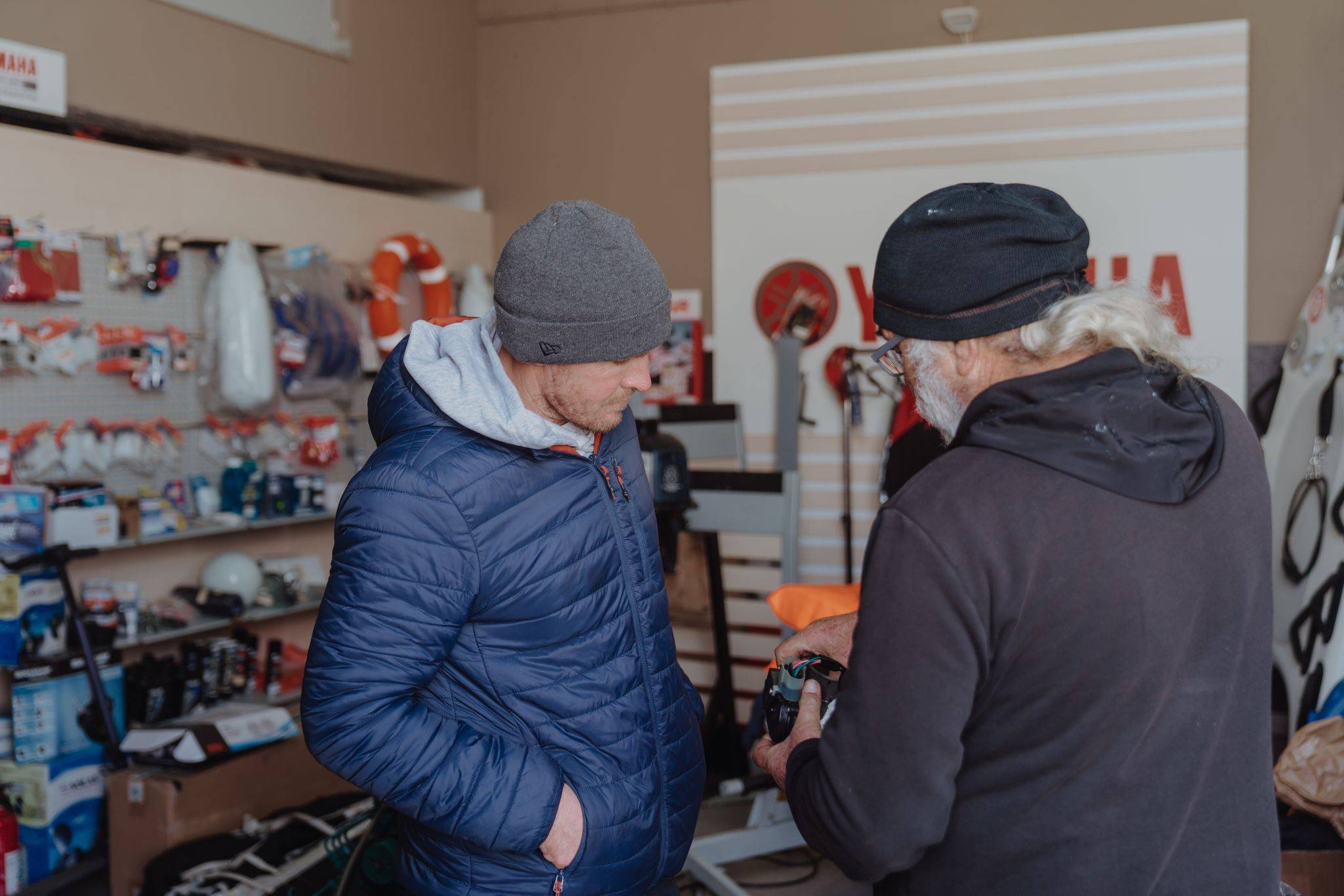 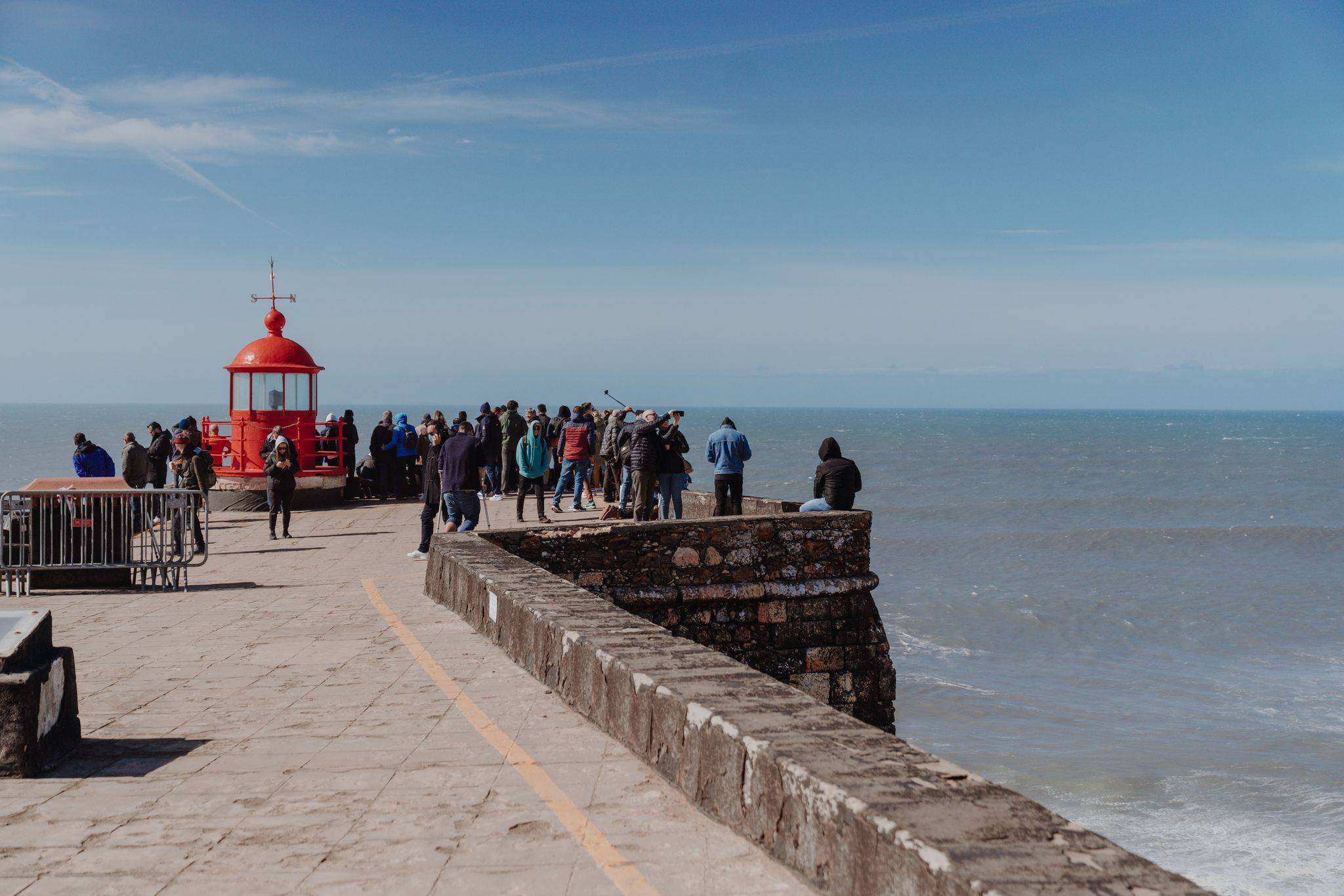 I suppose with Cotty being one of the first as well and the fact that he’s one of the only ones that lives here all winter, I guess that just shows how integrated he is here in Nazaré.Of course; everyone likes Cotty! Sometimes with surfing, it’s a competitive world and at the end of the day it’s the biggest wave or biggest barrel or biggest wipe-out is what comes first – second is last - so it’s a very competitive world. And sometimes they struggle… in the water they shout at each other, but I’ve never heard anything about Cotty, everyone respects Cotty – I’ve never heard someone shouting at him or anything. He’s a pioneer. Garrett surfed only once before Cotty arrived, so he’s a pioneer like Garrett. He’s a very respected member of the community, and everyone loves Cotty.

It’s funny you mentioned him as a pioneer. Because he’s so humble he’s never gone out asking for the credit, or fame, or respect he just naturally gets it.

Do you think he deserves more recognition from outside Nazaré?

He still has been one of the main characters in most of the documentaries that get out in the world. HBO, Netflix, and others. And of course, our first three documentaries. And the most curious thing is that in every documentary he is in the character people love the most is Cotty!

You can’t explain it, it’s something when you meet him; you feel the passion. The character there is something natural in him. He’s not an artist, he’s not a performer in terms of being in front of the camera, but you can tell he doesn’t need to show off.

After Nazaré, big wave surfing is not only about surfers, or people that love surfing, it’s about everyone. That was one thing about the project of Nazaré, we wanted surfing but when we first saw someone riding a big wave, we realised this was much more than just about surfing. This is a worldwide touristic product for Nazaré. So, Cotty is not only a well-known big wave surfer in the surfing community but also the worldwide community. You saw on the HBO documentary how everyone is in love with Cotty. 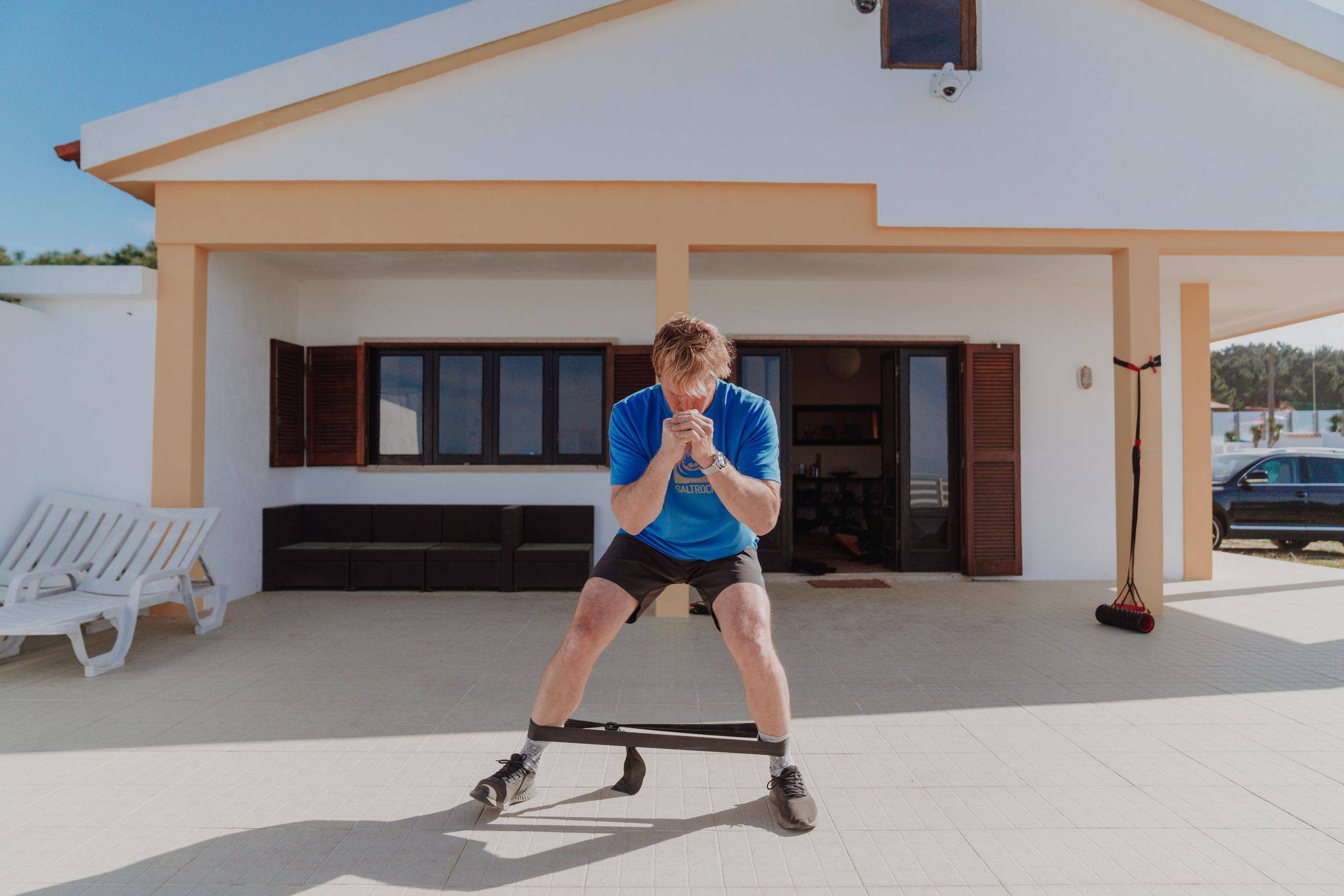 Stay tuned to hear the rest of the Nazaré store in Cotty: Comfortable with the Uncomfortable , airing 07/07/2022.

Discover more
Back to blog